Is there such a thing as too much insulation? If so, how much is too much?

Yes, there is, and it can be defined as follows: If adding more insulation costs you more than it saves you over a tolerable payback period then it’s too much insulation. You can think of “cost” in terms of dollars or in terms of environmental footprint depending what your concerns are. Assuming you’re primarily interested in saving money, it’s fairly easy to estimate what you can save by adding more insulation to a hot water tank. A typical electric hot water tank may consume around 250W of continuous power on average. Over one year that amounts to 2190 kWh of energy. Where I live electricity costs about $0.07 per kWh so a typical electric water heater with no additional insulation might cost about $150 per year to operate. Depending on use, perhaps $50 of this is actually used to raise the temperature of the incoming cold water. The remaining $100 is wasted in the form of heat dissipation to the surroundings.  A typical electric hot water tank may have about 5cm thickness of fiberglass insulation built-in. Assuming you will be insulating the outside of the tank with a similar material, the power consumption to maintain a given tank temperature will be inversely proportional to the total insulation thickness. So if you add another 5cm of insulation, doubling the total thickness, you will half the cost per year to maintain the tank at temperature. With a little math, it’s not difficult to figure out how much insulation can be added to achieve payback within a certain number of years.

Algebra is your friend

What we want to know is the maximum insulation thickness F that will payback within Y years? This is the thickness at which the cost of the insulation exactly equals the savings in the the first Y years (ignoring the cost of your own labor).

Setting the cost equal to the savings yields

Solving for the thickness

(trust me on the algebra) yields

Substitution into the formula yeilds

So if you want payback within 1 year, you can splurge on up to 25*1-5 = 20 cm of insulation (about 8″ thick). Add any more than that and your costs would exceed your savings in the first year. If you can tolerate payback within 2 years, add up to 25*2-5 = 45 cm of insulation (about 18″ thick). Does this seem like a lot? It certainly is when you consider most water heater blankets sold for the purpose are only around 4 or 5 cm thick (2″) at best. But it makes sense. Essentially what it means is that adding insulation is cheap compared to the cost of wasted heat. Given that a 4 or 5 year payback isn’t unreasonable this analysis seems to indicate that for all intents and purposes there basically is no such thing as too much insulation for a hot water tank. It makes economic sense to fill ALL the available space around a hot water tank with insulation.

Warning! It’s best practice to use only non-flammable materials for insulating any heating appliance. Fiberglass or rock wool batts like those used for insulating walls are a good choice. Sleeping bags, quilts, newspaper, etc are not. 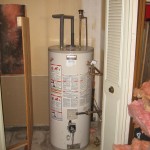 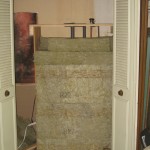 Although these images show what appears to be a gas hot water tank, I must emphasize that it is not. A gas hot water tank cannot be insulated on all sides like this since it would interfere with draft and could result in poor combustion and possibly carbon monoxide poisoning. I converted this tank to electric precisely so I could insulated it well and put it on a timer. For more information on the conversion process read Convert your gas hot water tank to electric. Running the tank on a timer had already reduced its energy consumption considerably. With the additional insulation I was able to reduce “on-time” of the heating element from 6 hours per night to 3 hours per night. It’s currently winter and the garage is cold. Last summer, I operated the tank only 3 hours per night without any additional insulation. I imagine this summer I will be able to reduce the on-time to around 2 hours per night. The heating element is about 520W. The reduction from 6 to 3 hours of operation per night corresponds to a reduction in average power consumption from 130W to 65W, or a savings of 65W. The savings will be less in the summer, since less power is required then anyway, but over an entire year, savings will likely be in the ballpark of 350 kWh or about $24 at $0.07/kWh. I know what you’re thinking. That’s not much, but within the first two years it is enough to pay for the cost of the insulation which validates the above calculations. The savings would be greater if not for the fact that I already modified the tank for high efficiency operation on a timer.

Despite appearances, I’m growing fond of my “frankentank”.

A couple people have inquired about how the same type of formula might be applied to determine the optimum insulation for a house. A house has the added complexity of different insulation thicknesses for attic, walls, basements, crawlspaces, doors and windows, and three modes of heat loss: air leaks, conduction to the air, and conduction into the ground. It also has another mode of heat gain: solar. The lifetime of a house is also much longer so it makes sense to consider interest rates and potentially increasing heating costs. Let’s make some gross assumption to simplify the problem. First, let’s assume solar gain and losses into the ground cancel each other out exactly so we can ignore them. Second, lets assume interest (which is an incentive to keep your money in the bank) and rising heating costs (which is an incentive to spend your money on insulation) also cancel each other out exactly. Finally, to avoid the issue of different insulation thicknesses, rather than calculating an additional thickness F, let’s calculate a thickness ratio R of the new thickness to the original thickness and assume we change the insulation thickness by the same ratio everywhere (including doors and windows which may not be practical but makes the math a lot easier). Doing a little algebra we find:

Y is the acceptable payback period. Let’s assume we want payback within 25 years, so Y = 25. Substituting those numbers into the formula yields

So based on this formula if I were building my house from scratch and I could wait 25 years for payback, I would do well to make the walls about 7 times thicker than they are and add 7 times more attic insulation than I currently have. That would put the walls at around R90 and the attic at aroundÂ  R133. So it looks like my house insulation has MUCH less than a 25 year payback period at today’s heating costs. Perhaps it is closer to a 4 year payback. I suspect that based on fuel prices when the house was built it may have had a 10 year payback.

Anyway, I am sure that not all my assumptions are valid. In particular, depending where you live and how well your home is designed for passive solar heating, it’s likely that solar gain may be significant compared to losses into the ground. But I hope I got my main point across: the optimum amount of insulation depends on what payback period you can tolerate.