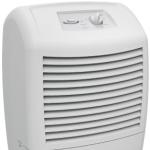 We (my wife and I that is) keep the temperature in our home relatively low in winter. As I’m writing this, it’s a balmy 16 degrees C in my living room. My lovely wife is wearing a toque and she’s about to put on another sweater because she’s feeling “a bit of a chill”, but she’s a trooper and wouldn’t have it any other way. That’s how she was raised. In Richmond, BC, where we live, winters are… well… wet. It’s pretty much a case of 100% relative humidity outside 24/7 and the water table is at ground level… well… truthfully sometimes it’s a few feet above ground level, but that’s why we have the pumps.

Combine 100% relative humidity outside with low temperatures inside and as you might expect, we occasionally have issues with condensation, especially on windows. “Experts” generally don’t recommend keeping interior temperatures below about 17 degrees C for exactly this reason. I don’t care much for expert opinions (experience has convinced me that I’m more expert than most of them), but I also don’t care much for condensation.

A solution with a bonus: “free” energy

The solution (without simply raising the temperature of our home), is a dehumidifier. While I purchased it for its intended purpose (to reduce humidity levels) I now realize that it also makes a very effective heater. Ah… but doesn’t it cost money and energy to operate a dehumidifier? Well… actually… NO! At least not in the winter, when we’re heating our home with electricity anyway. In fact, a dehumidifier is MORE efficient than an ordinary electric heater, which is already 100% efficient. Yes, a dehumidifier is more than 100% efficient at heating your home. That is to say the amount of heat a dehumidifier will release into your home is greater than the amount of electrical energy it will consume. The reason is simple: a dehumidifier removes energy from water vapor in the air in order to condense it to a liquid. This energy is released into your home.

It’s all about enthalpy

What is the efficiency?

How efficient is a dehumidifier at heating your home? Let’s figure it out together. I mean that literally. As I write this, I haven’t actually figured it out yet myself. I’m flying by the seat of my pants here, people; I’m a scientist gone rogue. But luckily I’m also a scientist who recently acquired a portable dehumidifier. I plugged it into a Kill-A-Watt meter several hours ago to measure exactly how much electrical energy (indicated in kWh by the Kill-A-Watt meter) it consumed. It’s been running for about 8 hours and it has consumed 3.87 kWh of electricity. Thus, based on the first law of thermodynamcis I know it has put at least 3.87 kWh of heat into my home.

However I have also determined with a simple digital scale that it has condensed 3.23 kg of water in that same time. How much additional energy did it release into my home as a result of that? That’s where the enthalpy of vaporization comes in. 3.23 kg multiplied by the enthalpy of vaporization of water (2257 kJ/kg) gives 7290 kJ of energy. A kWh is equivalent to 3600 kJ so 7290 kJ is equivalent to 2.025 kWh.

Thus, the total amount of heat released into my home by the dehumidifier over the last 8 hours is equivalent to the 3.87 kWh of electricity consumed, plus the 2.025 kWh of energy released by the condensation of water. The “efficiency” is equal to the energy output divided by the energy input or in this case (3.87 + 2.025)/3.87 = 1.52 or 152% efficiency. An efficiency over 100% is more appropriately referred to as a “coefficient of performance” since technically, it is impossible to achieve greater than 100% efficiency (having more than 100% efficiency in energy conversion would defy the first law of thermodynamics). So if you ever measure more than 100% efficiency, as I just did, what it really means is that you have moved energy from one place to another rather than simply converted energy from one form to another. Such is the case with a dehumidifier which removes energy from water vapor and releases it into the home in the form of heat, condensing the water to liquid in the process. But whatever the terminology you want to use, the fact remains that I can release 1.52 kWh of heat into my home for every 1 kWh of electricity my dehumidifier consumes.

I paid about $250 CAD for my dehumidifier. It consumes about 480W of electricity (3.87 kWh in 8 h) and outputs about 730W of heat (480W*1.52) into my home. I can buy a decent electric heater that will output 730W for about $50. So the difference in price is about $200. Let’s calculate the difference in the cost to operate. A 730W electric heater consumes exactly 730W of electricity. The dehumidifier only consumes 480W of electricity to produce the same 730W of heat. The difference (730-480) is 250W. Effectively I get a free kWh (1000 Wh)of heat for every 4 hours of operation. I currently pay about $0.07 per kWh for electricty, so I save about $0.42 per day when operating the dehumidifier in place of a heater. My heating season runs from October through March, or around 180 days of the year. Therefore, I can save about 180*$0.42 = $75 per year by operating the dehumidifier in place of a heater. That will take a little over 2.5 years to pay back the difference in price of $200.

Will this work for anyone?

In a word, “No”. The human body is most comfortable at a relative humidity between 20% and 60%. I can run my dehumidifier continuously in winter and not expect to ever drop below 20% relative humidity inside my home. The same may not be true for homeowners in other locations maintaining their homes at higher temperatures than I do. Heating with a dehumidifier works for me because of the high relative humidity in Richmond, even in the winter, and because of the low temperature at which I keep the interior of my home. It could work well for anyone who lives in a similar environment and keeps their home at a low temperature. But if you live where temperatures are usually below 0 degrees C outside in winter then you likely have a much lower relatively humidity. In that case, a dehumidifier will not be able to condense nearly as much water for a given amount of input energy and its operation may bring the relative humidity below a comfortable level.

Clothes dryer vs a rack and a dehumidifier

If you’re considering hanging your wet clothing to dry inside your home, vs using your drier, then you should know that a dehumidifier will be far more efficient than a clothes dryer. In the case of a clothes dryer, electrical energy is used to vaporize the water in your clothing and the water vapor (and all the energy you’ve put into it) is expelled from your home through your drier vent. There is a net loss of energy from your home. If instead you use a dehumidifier, the heat already in your home is used to vaporize (evaporate) the water in your clothing. This energy is recaptured by the dehumidifier when the water vapor is condensed to liquid. Unlike the drier, the dehumidifier doesn’t expel any energy from your home.

A dehumidifier is effectively a heat pump. Rather than extracting heat from the ground or the outside air, a dehumidifier extracts heat from water vapor contained in a home’s inside air. In my home, for reasons given above, I can run my dehumidifier continuously without reducing the relative humidity in my home below a comfortable level and I’ve found the coefficient of performance (COP) is about 1.52. A typical air source heat pump has a COP of around 4 assuming an outside temperature of around 0 degrees C (a typical Richmond winter). A typical ground source heat pump has a COP of around 7 assuming a ground temperature of around 10 degrees C (a typical Richmond ground temperature). So clearly, a heat pump (either air or ground source) is much more efficient. If I had a heat pump, I would be consuming more energy than otherwise by operating my dehumidifier. That said, I feel secure in the knowledge that I can run my single dehumidifier continuously and consume less energy to heat my home than if I were running an electric heater. I’ll save the installation of a heat pump for another day… perhaps.

Can you heat your whole home this way?

No. If I were to install more portable dehumidifiers to provide all the heat my home requires (to maintain a balmy 16 degrees C all winter long) I would almost certainly bring the relative humidity below comfortable levels, and the COP would drop below the measured value of 1.52 simply because there isn’t enough water vapor in the air to be condensed. So the idea of using a dehumidifier to heat one’s home is clearly not scalable. At best a dehumidifier may provide suplemental heat. I think I might get away with using two portable dehumidifiers continuously which would each save me about $75 per year based on the calculations above. That’s about $150 per year in total. Currently, that’s about 10% of my home’s annual heating bill.

106 comments on “Heat your home with a dehumidifier”